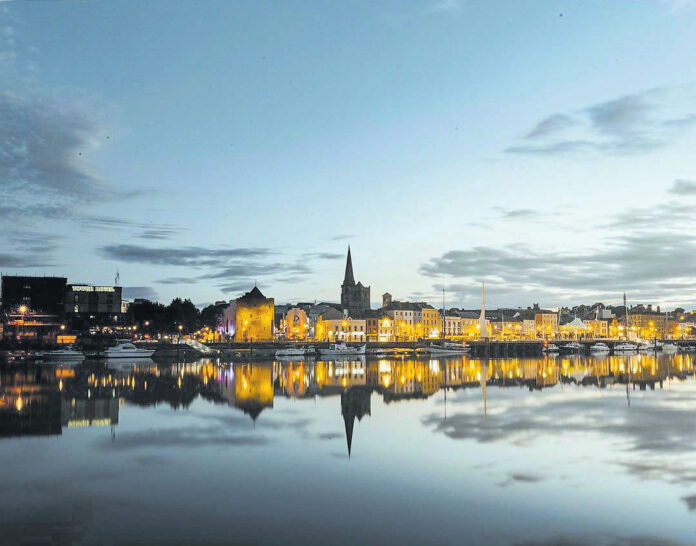 HOT on the heels of Waterford City being named the ‘Best Place To Live’, it was announced this week that €27m is to be made available for the city’s regeneration.

The N24 between Waterford and Limerick, which runs through Carrick-on-Suir, Clonmel, Cahir, Tipperary Town, Pallas Green, and several other towns and villages, has long been a source of grief in the areas involved.

It was selected for ‘pre-appraisal and early planning’ in 2018, particularly the sections from Waterford to Cahir and Cahir to Limerick Junction.

This week’s published plan has the N24 improvement as ‘subject to further approvals’ as well as the N25 enhancement of the road between Waterford city and Glenmore in south Kilkenny, and the N11/N25 between Oylegate and Rosslare in Co Wexford.

Another project which was successfully completed in recent years having been part of previous plans, included the new Rose Fitzgerald Kennedy Bridge over the river Barrow.
Also mentioned was the Dunmore Wing at University Hospital, and the Waterford Greenway, which was developed between 2014 and 2017 at a cost of €21m.

“What Waterford has achieved over the past two decades is simply outstanding.”

The long-awaited development of the North Quays in Waterford city was provided for in the 2018 plan, with funding since allocated to allow for strategic development zone designation and the infrastructure needed to proceed with a major business/leisure/tourism/residential development on the site.

However, the plan hit a snag earlier this year when the council lost patience with the private development company involved in the regeneration project, because of contract delays.

A new rail station, seen as part of the overall necessary infrastructure for regeneration, is part of the plan, as are bus corridors in Waterford city, the BusConnects scheme and a “sustainable transport bridge”, which would link the north and south quays.

Meanwhile, the Technological University for the South East (TUSE), which is now due to formally come into being at the start of 2022, is again referred to by the Government.
In 2018, ‘new buildings’ in Carlow and Waterford to facilitate a merger of their institutes of technology, and a ‘site in Wexford’ to facilitate an outreach campus as part of the southeast university, were all promised.

Last week Waterford was named ‘The Irish Times Best Places to Live in Ireland 2021’.
Judges praised the beauty of the city’s buildings, its liveability, its affordability and its vibrancy, saying: “What Waterford has achieved over the past two decades is simply outstanding.”

The city, which was the unanimous choice of the judging panel, beat off stiff competition from the four other shortlisted locations: Clonakilty, Co Cork; Galway city; Glaslough, Co Monaghan; and Killarney Co Kerry.

The Irish Times Best Place to Live in Ireland contest, which is supported by Randox Health, began in June.

Over the summer, 2,400 people nominated 470 places across all 32 counties for the title.
While the number of nominations was a factor in the selection of the top locations — Waterford received 47 — the quality of the place itself was the chief consideration.

Waterford man gets ban from owning any dogs

All that glitters … is silver