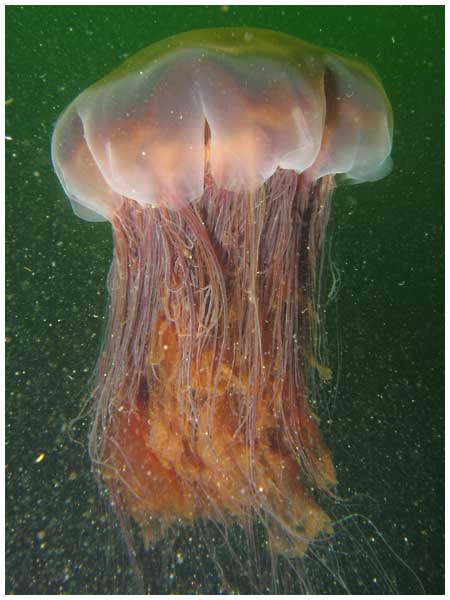 Portuguese man o’ war is not strictly a jellyfish and is actually a siphonophores, and can grow to lengths of 40 metres.

In a statement, the Search Unit said: “(It) may still be able to inflict a serious sting to any person, child or even a dog that comes into contact with it.

“Please give it a wide berth and keep children and your dogs well away from it.”

Earlier in the summer, swimmers were also told to keep an eye out for for the Lion’s Mane jellyfish (right) while bathing.

The jellyfish is a rust colour and can be up to one metre long, have 150 long tentacles on the bottom which can give off a nasty sting that is known for great pain, nausea, cramps and headaches, according to the HSE.

The Lion’s Mane is the largest species of jellyfish in the world and can sting even after they’ve died with reports of several of them being washed up on Irish coasts in recent weeks.

Meanwhile, swarms of Moon Jellies have also been reported along our shores.
“There are nine species of jellyfish normally found in Irish waters…some with mild stings such as the Moon Jellies, and some with quite severe stings such as the Lion’s Mane Jellyfish,” Pat Ó Súilleabháin General Manager of SEA LIFE Aquarium in Bray told the Waterford Today.

“Recent years have seen increase sightings of swarms of jellyfish, not just locally, but also globally.”