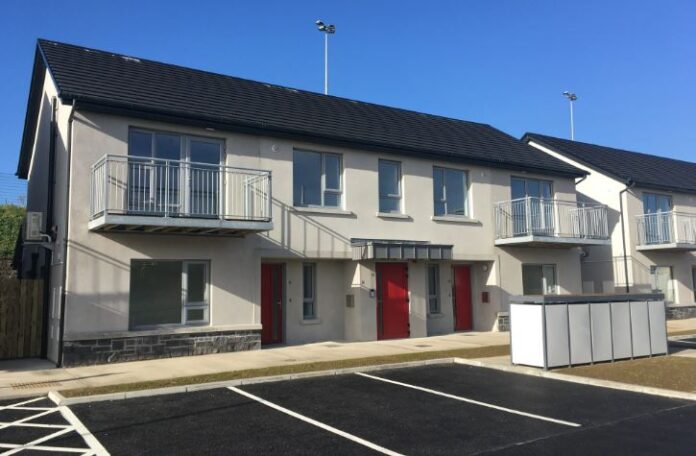 A NEW housing development consisting of 16 new social housing units has just been launched in Kilmacthomas.

Known as Port na Machan, the homes have been praised for their high standard of finish and are A2-energy rated for greater energy efficiency and cost savings. The development was officially opened by Cllr. John O’Leary, Cathaoirleach of the Comeragh District. Minister of State for Mental Health and Older People Mary Butler was also in attendance as the ribbon was cut.

Funded by the Department of Housing, Local Government and Heritage, John Somers Construction was the main contractor on the development with the design team led by CJ Falconer & Associates.

The development consists of a mix of homes with six one-beds, eight two-beds and two three-beds.

All of the ground floor units have a south-facing garden, while the first-floor apartments are fitted with balconies, overlooking the River Mahon and river walkway.

Addressing the attendees Cllr O’ Leary commented: “The importance of having a home of your own cannot be understated.

“A home provides security, control, belonging, identity, and privacy, among other things. It gives us a place to set off from in the morning, and a place to come home to.”

Ivan Grimes, Director of Services for Housing, Waterford City and County Council, said, “We are extremely pleased with the standard of finish at Port na Machan. All of the homes are A2-energy rated for greater energy efficiency and cost savings.

“Not only are the homes appointed to the highest standards, they are set against one of the most picturesque backdrops in the heart of Kilmacthomas, close to schools and amenities, a stone’s throw from the Waterford Greenway and close to Dungarvan and Waterford city.”