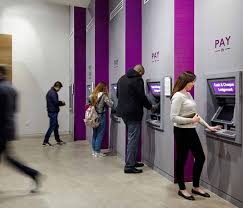 SINN Féin TD for Waterford David Cullinane has welcomed the announcement that AIB will not now make many branches cashless and praised local communities for standing up for their services.

The decision by the bank would have included many branches in Waterford and forced local customers to travel for basic services.

Mr Cullinane said: “I welcome that AIB have reversed their decision. This is the right thing to do. Their decision to make these branches cashless was short-sighted and poorly thought out. It would have caused major problems for customers here in Waterford, including vulnerable people and businesses, by forcing them to travel long distances for basic services. It

should never have been allowed to get this far

“It is clear that the Future of Banking in Ireland Review is urgently required and must
include close examination of local banking services, and the role of the Credit Union
sector, to ensure that customers are not subjected to this unacceptable stress again.

“Customers in Waterford deserve to know that they will be treated fairly by their bank and that an appalling situation like this will not be allowed to happen in the future.

“The Government are majority shareholders in AIB and need to assert their role in ensuring banks service communities.”

“As Minister for Older People I really welcome this decision,” Minister Butler said.

“Withdrawing cash services from branches will leave many of our most vulnerable people in towns across Ireland without cash banking services, with some customers having to travel an hour to access cash and ultimately getting left behind in terms of being able to effectively deal with their personal finances on a day-to-day basis.”

The Waterford TD added: “I am pleased to see that AIB have now decided to review the
situation and I will work with all relevant stakeholders to ensure that the voices of those most vulnerable are heard and they get all the support they deserve and need.”

Unlike other banks that have dispensed with cash at counters in certain branches, AIB
decided to go one step further and remove ATMs from the  affected properties, leading to political and public backlash.