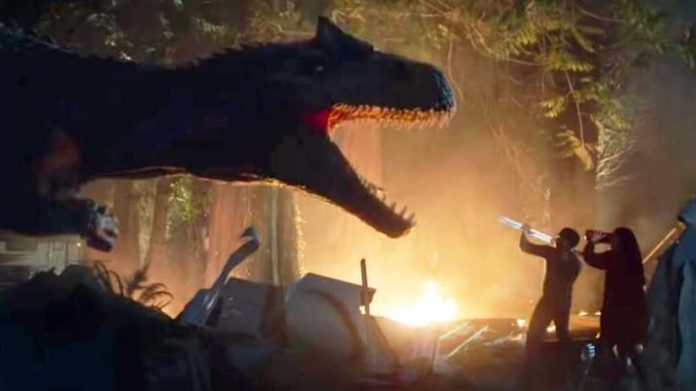 FOR a nation that loves the sound of its own voice, seemingly the “Irish can keep a secret” according to the director of a Jurassic Park short film that was shot here.

Colin Trevorrow, director of Battle at Big Rock, has revealed how the movie which was shot in the Powerscourt Estate.

“We shot it in Ireland last winter. They have a grove of redwood trees that look exactly like the national parks in Northern California.

“I honestly never thought we’d make it this far without getting found out. The Irish can keep a secret. No one’s ever shot a Jurassic movie in Ireland, the crew was fired up.

“The cast was fully committed to making 8 minutes that could stand alongside the movies.”

In the short, dinosaurs live in the wild now, with humans and dinosaurs battling to co-exist.
The film features a family on a camping trip whose visit is interrupted by a large herbivore trundling past their caravan, and a battle ensues.

Featuring Selma and Moonlight actor Andre Holland and End of Watch’s Natalie Martinez, it was completed in five days with a small crew.

He added: “We had two child actors, a giant animatronic dinosaur and a baby.  It shouldn’t have worked, but it did.”

Speaking about the best-kept secret in Wicklow, Managing Director Sarah Slazenger said: “We are thrilled that the prestigious Jurassic Park movie series chose Powerscourt and Ireland as the location for their latest release.”

Government needs to put money where its mouth is when it...