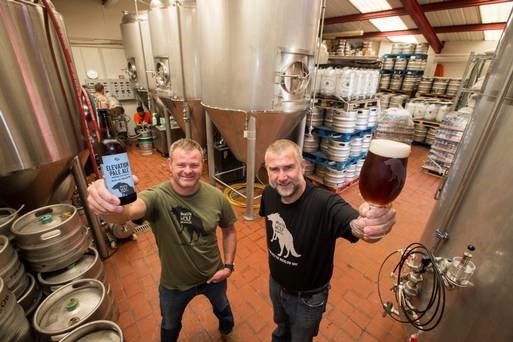 We’re only here for the beers! And what fine beers they were too …

The launch coincides with a number of key milestones including the brand’s fifth birthday, a complete rebrand and the move from bottle to can packaging.

Guests enjoyed a welcome beer of Elevation and sampled some of the food on offer from Bray’s very own Platform Pizza before taking a tour around the new brewery and all of its features.

Damn Fine Print was on hand offering attendees the chance to screenprint a bespoke Wicklow Wolf tote bag to keep as a momento from the event.

Friends of the brand were then invited to join the pack and become part of the new brewery’s history by signing their name on a large scale mural to mark their attendance at the event.

Meanwhile, a local bluegrass band provided the soundtrack for the evening and created a lively and jovial atmosphere.

Speaking at the launch, Co-Founders of Wicklow Wolf, Quincey Fennelly and Simon Lynch said, “This brewery has been years in the making and we’re so proud of what the Wicklow Wolf team has achieved. Sustainability has always been at the forefront of what we do at Wicklow Wolf and with our new brewery we’re one step closer in achieving our goal of operating a carbon neutral facility.”

Built on a two-acre site, the new 17,000sq ft brewery will be home to Wicklow Wolf’s new brewhouse, tanks and canning line, carefully constructed to allow the brand to drastically decrease its water wastage, energy use and carbon footprint using only 100% renewable electricity in the making of their beer.