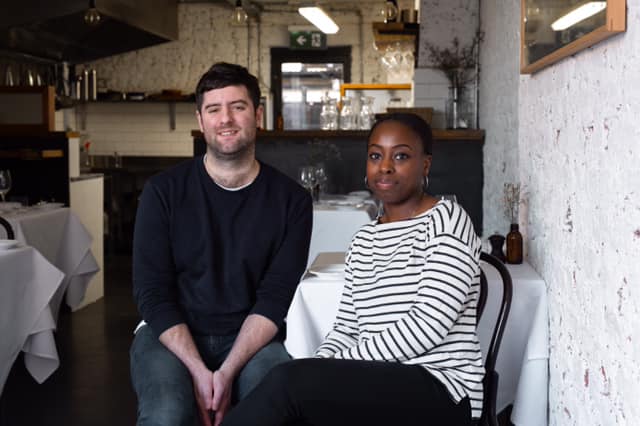 ONE of Dublin’s most popular restaurants is moving to Tramore. Fish Shop restaurant on Dublin’s Queen Street, near Smithfield, announced its intention to close on December 21.

Its owners, husband and wife team Peter Hogan and Jumoke Akintola, (pictured)revealed that they would be moving to Co Waterford. Their new 40-seat restaurant, based in a Victorian house on Turkey Street, is expected to open its doors in mid-February under the name of The Beach House.

The couple decided on the move when the Turkey Street house became available to rent just as the final year of their Queen Street lease drew to an end.

Oh we do like to be beside the seaside

The owners Tweeted: “Oh we do like to be beside the seaside … So we are moving to Tramore to open our new restaurant. Our last service in Queen Street will be December 21.”

For Peter Hogan the move is a homecoming since he is originally from Tramore. His wife is from London, where the couple met when they were both trainee teachers.

They set up a street-food stall as a hobby over the school holidays. They enjoyed it so much they quit teaching and returned to Dublin to open a fish shack in a south city market.

Two years later they opened the Queen Street restaurant and then a second chip shop and wine bar on Benburb Street. The restaurants became famous for their no-choice menus which changed daily and for a wide selection of unusual wines.

“Our market stall in London taught us to keep our offering simple and something like fish and chips, done really well, was easier to get off the ground and buzzy enough to draw attention,” explained Peter.

€3m deal sends our gin Down Under