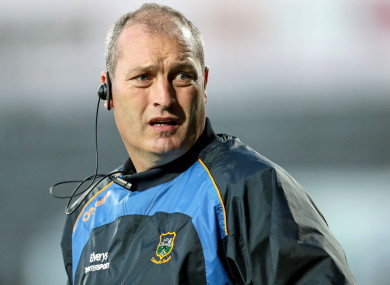 WATERFORD’S new hurling boss says the prospect of opposing his native Tipperary was “one of the biggest bridges I had to cross in my own mind” before taking the job.

He will have to cross that bridge again in the first round of the Munster Senior Hurling Championship.

The schedule, announced last week, matches the Déise with Tipp in the first round. They will meet Limerick in round two, Cork in round three and Clare in round five, with no match in the fourth round.

New manager Liam Cahill has spoken of his concerns about facing Tipp. He managed their underage sides to six major honours (three All-Ireland titles and three Munster crowns) since 2015 and will now be going up against some of those successful players at Munster senior level.

“To be honest (playing Tipp) was one of the biggest bridges I had to cross in my own mind,” he told the sports web site, The 42. “You’re immersed in underage hurling and in Tipperary hurling all your life. Then you turn around and say ‘how are you going to take down your own troops if the opportunity arises’.”

He felt, however, that a lot of the younger players he had managed were not yet ready for senior level.

“Whilst there will be quite a number of them making the squad and coming at various stages next year for Tipp, there’s still not going to be a high majority of them there,” he said. “That makes it a small bit easier but it’s still a hard ask and it’s something that did bother me and something I did find difficult to get my head around.

“A couple of weeks after the All-Ireland, a member of the selection committee in Waterford contacted me. After that it was a case of getting my head around if it was something that I would see myself doing.

“When I thought about it at length and about the possibilities of what could be achieved in the position, the kind of players that are at your disposal probably attracted me a lot to it. It excited me really when I sat down and thought about it.”

Dates and times for the SHC fixtures are expected to be announced by the Munster Council next month.

The likely dates are: