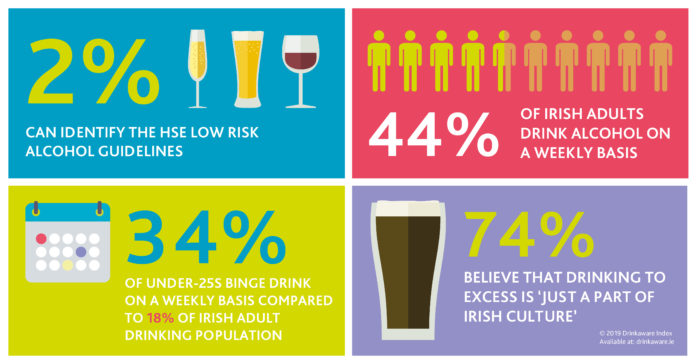 The 2019 Drinkaware Index report, published recently, identified two major risk-based groups within the drinking population: hazardous drinkers at increasing risk of dependency (21%) and a 23% group at potential risk of becoming hazardous drinkers. Within the findings is a deep-rooted and broad acceptance of excessive drinking as our cultural norm, with 44% reporting weekly drinking.

The research, carried out by Behaviour & Attitudes with a nationally representative sample of 1,000 adults, also reveals particularly worrying trends in alcohol consumption in the under-25 age group.

The 2019 Drinkaware Index shows that the majority of Irish adults have little to no awareness of what constitutes low risk drinking, while significant proportions (19%) engage in regular binge drinking sessions.

“The Drinkaware Index research highlights that a significant number of Irish adults are drinking at a level that may be putting their health at risk. Of particular concern is that these drinking habits appear even more embedded among younger people, with 64% of under-25s stating that they often drink as a coping mechanism.

“The negative impact of alcohol in Irish society is widely known, and both national data and international statistical comparisons are well cited and acknowledged. What however is less comprehensive, is published analysis on the motivational drivers, the behaviours and attitudes of Irish society towards alcohol across different demographics and ages.

“Qualifying the context in which alcohol is experienced – in terms of both consumption and environmental exposure – is critical if we are to understand the depth of the social problem we are trying to redress. The 2019 Drinkaware Index has quantified and exposed, for the first time, the collective complacency and cultural acceptance surrounding Irish drinking patterns.

“To get to the heart of the problem, we need to examine and reassess some of our deep-rooted cultural norms and wide acceptance that we are simply excessive drinkers by virtue of our national heritage.”

Scanner sits idle while UHW buys a new one