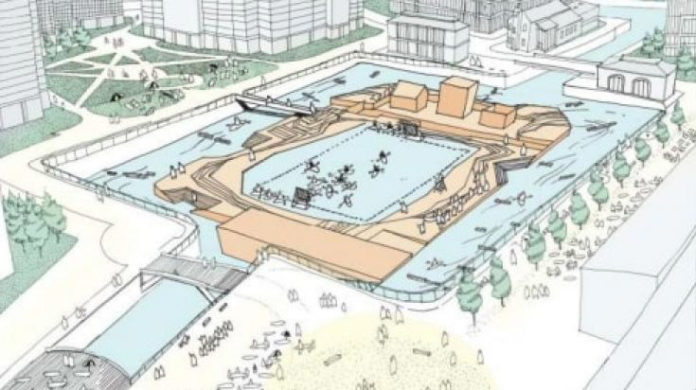 PLANS for a €12m international standard white-water rapids rafting circuit and polo pool in Dublin have come up again, despite the project being described as a “white elephant” by the city’s last lord mayor.

City councillors were presented with plans in January to convert the early 19th-century dock into a mechanically-propelled rafting facility with a water polo pitch and an emergency service training centre. The 100m by 70m basin is located between the IFSC the and the CHQ building next to the River Liffey.

The council had hoped to have final approval for the project by July but members of the council rejected the scheme before May’s local elections.

Then lord mayor of Dublin Niall Ring said the project didn’t “add up”.

“What’s the genesis of this? Whose baby is this? Who has decided the north inner city needs white-water rafting? I can’t honestly support it at this stage, I think it could be a white elephant.”

However, following a change in the council’s composition since the local elections, council management is making a fresh attempt to develop the facility. The council hopes to demolish the former DDDA office building on Custom House Quay for the venture.

Submissions can be made on the plans until October 3rd, but the final decision on whether to go ahead with the facility ultimately rests with councillors.