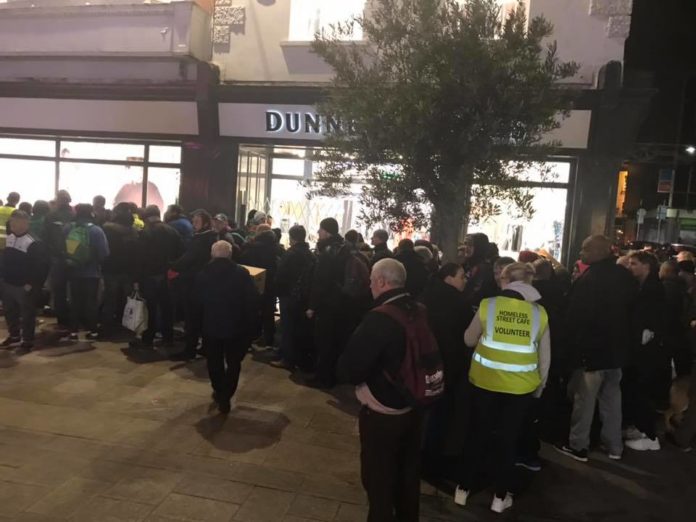 PARENTS are turning up at food queues at night with their new born babies, a homeless volunteer group has revealed.

The Homeless Street Café highlighted the plight of “Sam” when they released a photo of a child sitting on a piece of cardboard eating a hot meal at night.

The organisation is run by a group of volunteers and operates on Grafton Street, Dublin every week. Heartbreakingly, the group says newborns are now appearing in queues.

One of the founders, Denise Carroll, told the Irish Mirror: “That’s the reality of it, we have newborn babies being brought here or their parents are coming here to get them things they can’t afford.

people can’t survive on what they have right now

“People don’t realise that this is a support service, people can’t survive on what they have right now, they have no proper cooking facilities in their temporary accommodation, so they come in here for a hot meal, and then we have parents maybe getting a school lunch for the next day or treats for their child for during the week. These are extra supports for them.

“Yes they have allowances and accommodation but they don’t have facilities to cook properly and there are costs of travelling to schools. It all adds up.”

The service, which relies solely on donations, serves up hot meals, desserts and drinks and provides clothes and underwear every Tuesday night.

Meanwhile, a 12 year old girl has revealed she was so moved by the plight of homeless children in Ireland that she has become a volunteer at a night street café.

Big-hearted Jodie Dempsey is a regular face at the dessert counter on Grafton Street in Dublin every Tuesday night between 8pm and 10pm.

Jodie, from Clonee in Co Meath, works alongside dozens of volunteers, who run the Homeless Street Café, along with her grandmother Carolyn Dempsey who cuts hair for free, said she wanted to get involved after she came in to the city centre to help her granny one night and saw children in the queues with their parents waiting for hot meals.