GAA footballer, yoga instructor and patron of the Irish Lung Fibrosis Association, Michael Darragh Macauley, is the face of a newly-launched yoga exercise DVD for people with lung fibrosis. Yoga has been shown to provide benefits to people with lung fibrosis in helping their health and well-being through improved breathing, mobility, flexibility, as well as through the relief of tension and anxiety.

The DVD is now available to view online or to order at www.ilfa.ie.

In the video produced by the Irish Lung Fibrosis Association – which is available to view online or to order at www.ilfa.ie – Michael Darragh takes three patient volunteers through a series of breathing and meditation techniques, followed by physical exercises.

There are two levels of exercises featured which are suitable for beginners and those who feel they can progress to a more advanced stage. Before undertaking the exercises, viewers are asked to adhere to the “BORG” scale – named after Gunnar Borg – which helps them assess how breathless they should be when exercising and gauge what is the right level of activity for them. 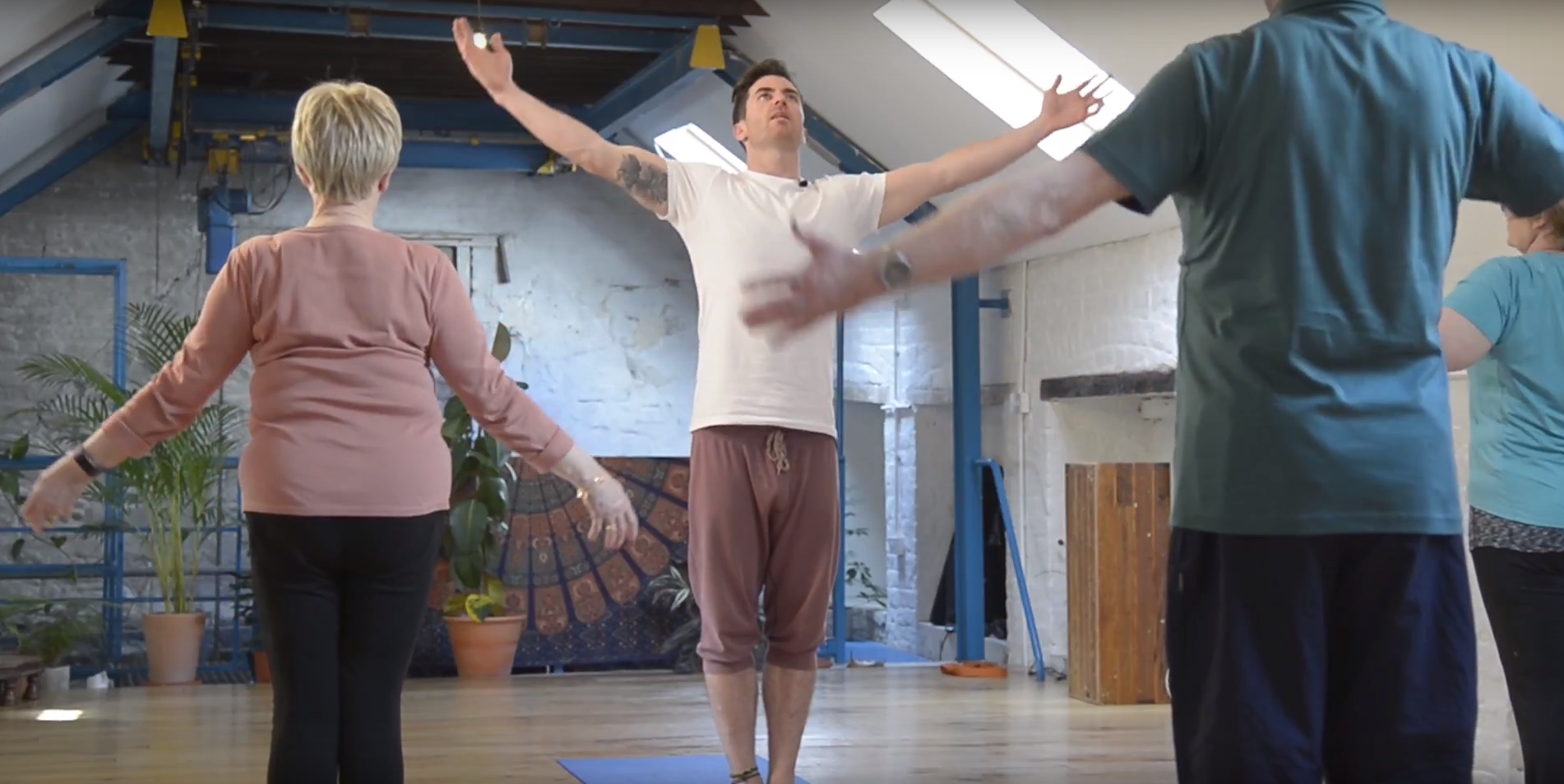 For Michael Darragh Macauley, lung fibrosis is a cause especially close to his heart having sadly lost his father to the disease:

“It was a very tough time for all the family as you can imagine. Consequently, I was very happy to become involved in this DVD which I hope will make a real difference to the lives of people with lung fibrosis. I have a deep appreciation of yoga and the holistic benefits it offers across a whole range of areas. Even though it becomes increasingly difficult to exercise with this condition, it’s important that patients do try, and yoga is perfect because they can push themselves as hard as they see fit.

“In the video we go through a series of exercises that can help people manage their health and cope with the challenges of living with the condition. The great thing is that the exercises can be done whether seated or standing and can be adapted to suit each individual’s abilities. People can go at their own pace and no one gets left behind.”

Matt Cullen, from Swords, is one of three people with lung fibrosis to volunteer to take part in the yoga exercise DVD under the expert guidance of Michael Darragh. Matt’s visions of becoming a body contortionist were slightly wide of the mark:

“I had never tried yoga before and had the false notion that it would involve somewhat contortionist body movements! However, doing the yoga class with Michael Darragh was a very relaxing experience and there was no pressure whatsoever. The yoga exercises were safe, easy to follow and very do-able, and I found them good for both mind and body. Not only did they help with my breathing and flexibility, but they were also really helpful in reducing the stress and anxiety that comes with living with lung fibrosis.” 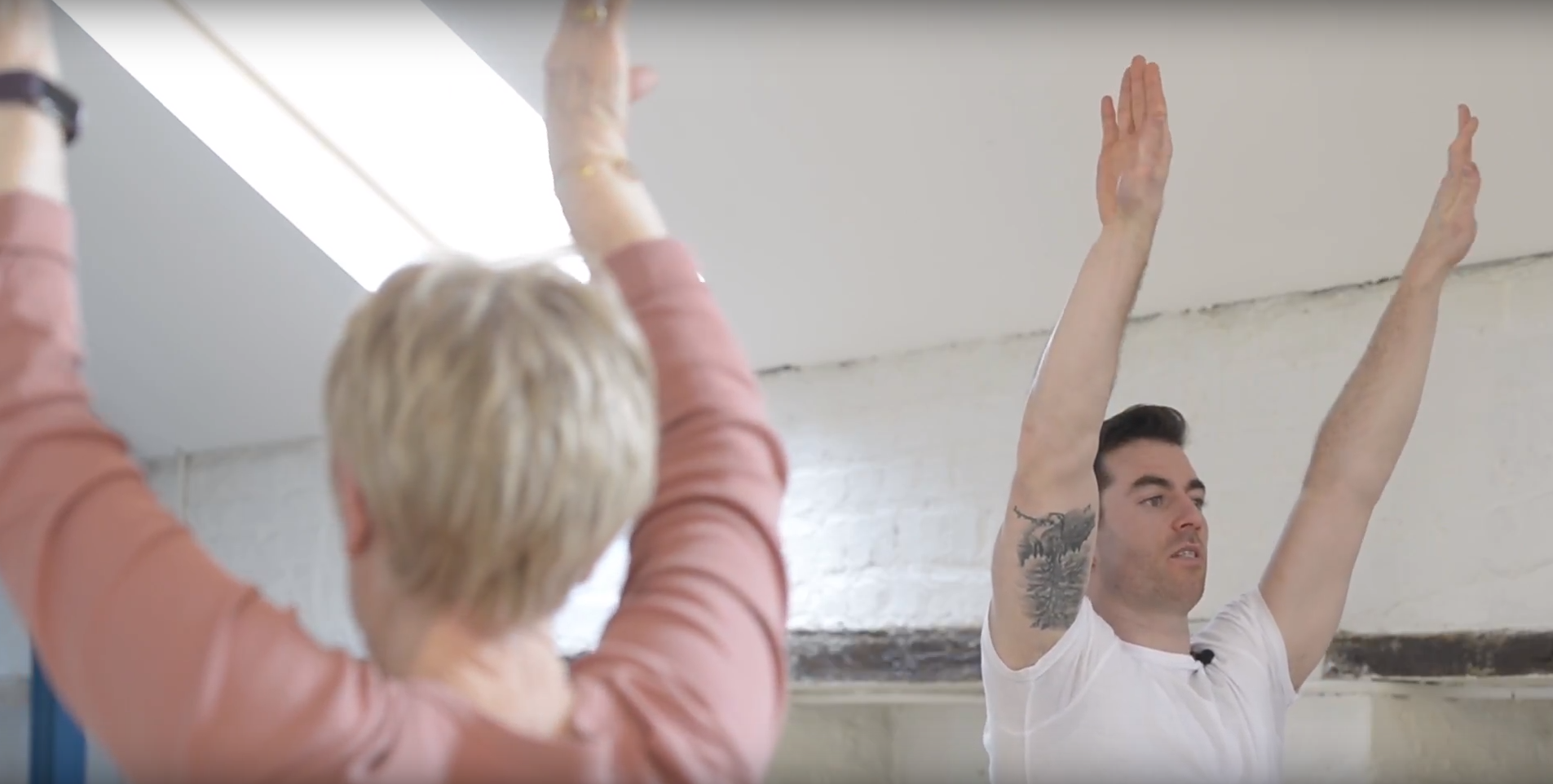 yoga is suitable for people with varying levels of lung fibrosis,

“One of the great things about yoga is that it is suitable for people with varying levels of lung fibrosis, including those who may have had a transplant or are oxygen dependent. For those on oxygen, we would urge them to speak to their medical team about turning up their oxygen levels to agreed levels so that they can cope with the activity and exercise comfortably. Everyone gets breathless when they exercise but what is important is that lung fibrosis patients know how to manage their level of breathlessness. Positive lifestyle changes and, in particular, physical exercise, is hugely important for people with lung fibrosis. This DVD now means that they can exercise in the comfort of their own sitting room.”

There are more than 200 types of lung fibrosis and IPF, or Idiopathic Pulmonary Fibrosis (meaning the cause is unknown), is the most common. IPF is a rare, chronic, progressive condition that causes irreversible scarring of the lungs. It is characterised by extreme breathlessness, low energy and fatigue, dry cough and, ultimately, respiratory failure requiring medical oxygen therapy 24 hours a day. Unfortunately, there is no cure.

Approximately 400 patients are diagnosed with IPF each year and 1,000 are living with the condition. It is usually diagnosed in people over the age of 50, affects more men than women, and is more common in smokers or those who have smoked in the past. However, a substantial number of patients with lung fibrosis have never smoked, and it has been known to develop in different family members, suggesting a possible genetic link.

This yoga exercise DVD has been made possible thanks to the support of US philanthropic organisation, Three Lakes Partners. The Irish Lung Fibrosis Association also offers a number of other exercise tools for people with lung fibrosis, including its 2,000 Steps a Day Exercise Challenge Walking Pack and an exercise DVD. To order, simply visit www.ilfa.ie