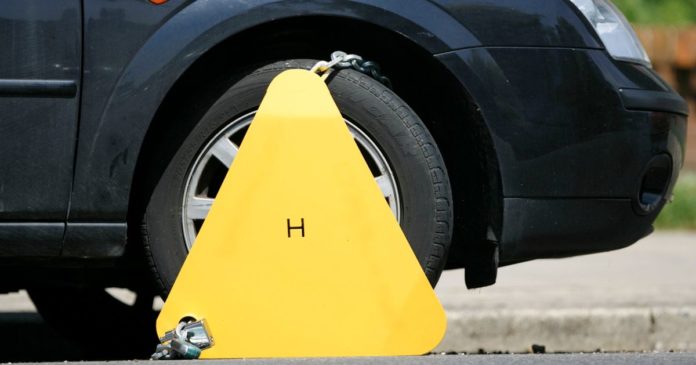 ONLY one third of the appeals made over clamping in Dublin City this year have been upheld, with more than 23,000 vehicles clamped and only 6% of cases appealed.

In all, 23,147 vehicles were clamped in the first six months of this year, with 1,570 of these appealed, according to information released to TheJournal.ie under the Freedom of Information Act.

Of these, 436 have been successful at the time of writing, with 60 open cases yet to be determined and 1,074 declined. This contrasts with last year, when over half of clamping appeals were successful in the year to September.

Every year, only a small number of drivers who have their vehicles clamped under the jurisdiction of Dublin City Council appeal decision.

Here are some of the reasons why people appealed the decision to clamp their car,  seeking the €8O cost back (in these cases, a decision had not yet been made).

One resident in Glasnevin said they were shocked to find out their car had been clamped.
“I have been parking it in the same place for the last year due to the free parking,” they said.

“Nobody at my residence was informed of these new paid parking measures being put in place in this spot which is scandalous as I have been off work and away from Dublin and had no way of knowing that I should move my car before I went.”

In another case in Dublin 4, a motorist sent in a copy of their parking permit to try to get the €80 fee back.

I would hope I could receive a refund of the fine I paid.

“However, on the day I was clamped, I was driving a rental car as my regular car was in the garage for repairs. I used a scratch off parking permit on the day in question.
Unfortunately, I scratched off the wrong date. I dated it for the following day in error. I appreciate I made an error, however my intention was to follow the rules. I am a registered permit holder and as a result I would hope I could receive a refund of the fine I paid.”

This motorist also enclosed a copy of the permit and photos of the clamped vehicle.

Another motorist who found themselves clamped paid the €80 fee and waited to receive a text message to confirm the clamp was removed. She said she received no such text.

When she returned to check if it had been removed, a new ticket had been placed on the windscreen of her car.

“I have been forced to pay twice for the one parking violation,” she said.

Last September, Dublin City Council put out an invite to tender worth €45 million for a clamping operator.