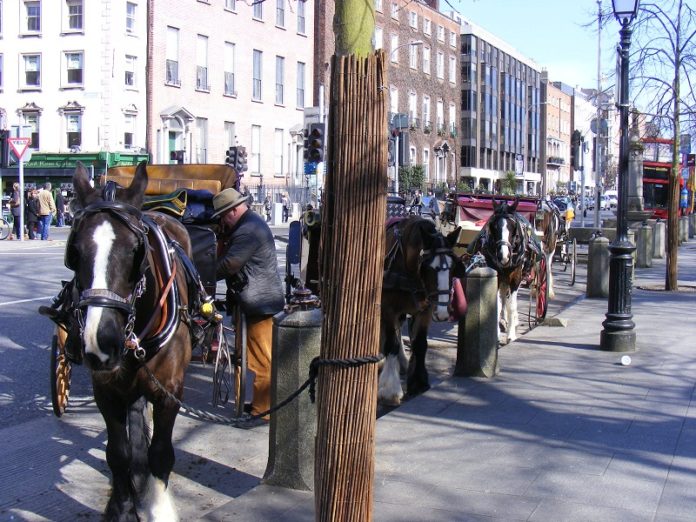 DUBLIN’S horse and carriage drivers led a protest to Leinster House earlier this week to demand new bye-laws be made for drivers in the City centre.

Since 2018 Dublin City Council no longer issue licences for carriage drivers that allow them to operate commercially. This was because of an old Victorian law that sees this responsibility go towards ‘a police force’ (Dublin Carriage Acts 1853, 1854 and 1855), which resulted in the Dublin City Control of Horse Drawn Carriages bye-laws of 2011 to not be valid, a siutation that has left many carriage drivers in a ‘legal limbo’ as they are unsure of what happens next.

The drivers are concerned that a lack of bye-laws could lead to unlicensed operators and they have safety concerns for animal welfare.  A group of drivers delivered a letter to Minister of Transport Shane Ross which asked to allow Dublin City Council to draft new, improved and enforceable bye-laws.

TheJournal.ie contacted the Department of Transport about the issue. It stated that since the older Dublin-specific legislation was not repealed, Dublin City Council has no legal basis to make bye-laws.

Minister Ross has requested that the Department of Transport engage with An Garda Síochana and Dublin City Council to seek separate legal advice:

“Depending on the outcome, there may be a requirement to amend or repeal legislation in order to ensure an appropriate, modern regulatory framework is in place for the horse and carriage business,” he said.

District with huge crime rate has no cop shop