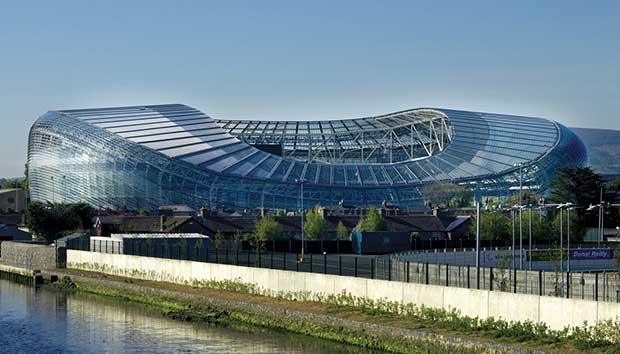 WITH Dublin having been chosen to host four games in Euro 2020, the move be worth around €106m to the city, according to an economic impact for Dublin City Council.

Lansdowne Road will play host to three group games and one Round of 16 game in June 2020, in what will be the biggest sporting event be held in this country.

Up to 96,000  extra tourists are expected to visit Ireland during the two-week period between June 15th and June 30th, with the average stay estimated to be around six nights.
Half of these will be spent outside of Dublin and “foster balanced regional development,” according to a statement announcing the independent economic impact study carried out by EY-DKM for the council.

creation of 2,780 full-time jobs before and during the tournament

“UEFA Euro 2020 will also result in the creation of 2,780 full-time jobs before and during the tournament as a result of additional tourism and organisation spending,” it said.

The study suggested that for every €1 spent, the tournament would generate €4 of additional revenue for the Exchequer. It also looked at the impact to the economy of hosting the qualifying draw at the Convention Centre Dublin, in December last year, finding that this event generated €2m for the Irish economy. Up to 600 overseas visitors attended during the off-peak tourism season for that event.

“With an expected global audience of five billion, Dublin’s hosting of UEFA Euro 2020 will represent a unique opportunity to showcase the city and country to the world,” the statement said.

Dublin is world-renowned for being a welcoming destination for tourists

“We are extremely proud that we will be hosting UEFA Euro 2020 and sharing our wonderful city with visitors from all over Europe.”

The anticipated cultural and economic impact of the tournament will leave a long-lasting legacy on our city and beyond.”