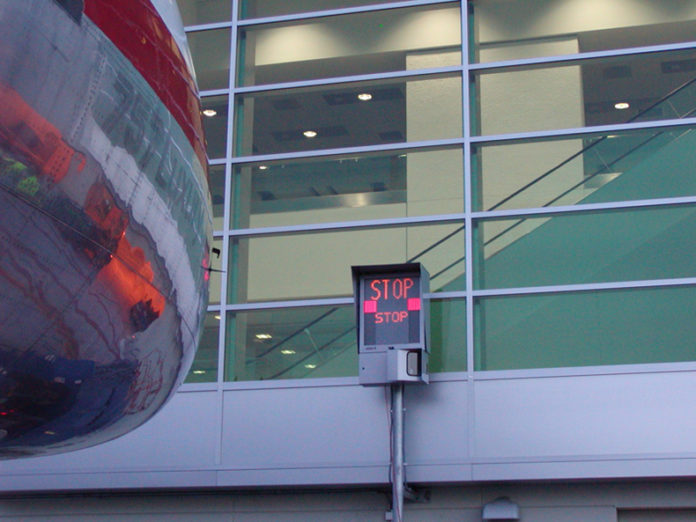 DUBLIN Airport has installed a new automated aircraft docking system, which it claims will reduce delays and cut emissions.

During what amounts to its busiest summer ever with an average of 100,000 passengers a day, Dublin Airport has rolled out new technology to streamline the coming and going of aircraft.

The DAA (Dublin Airport Authority) announced the installation of an automatic visual docking guidance system (AVDGS) on all its aircraft contact parking stands.

This system includes an electronic display above aircraft parking stands to provide real-time information to pilots when they are parking aircraft on arrival or pushing off for departure. It contains an infrared HD camera that scans the aircraft parking area to see if it can spot any loose baggage or other equipment in the spot that might make parking difficult.

This, DAA said, will let baggage and ground handlers get to aircraft quicker for faster turnaround, helping overcome delays for airlines and passengers. It also means that the aircraft and its support vehicles are not running engines unnecessarily – this in turn can help reduce carbon emissions from the airfield. When visibility is very low, the system can help aircraft park much quicker than before.

AVDGS is also designed to work with airline marshals who guide aircraft to and from a parking stand. By inputting data such as aircraft type and flight data, the system can automatically gauge aircraft clearances, stopping distances, and the exact on and off stand times.

This is fed into the Airport Collaborative Decision-Making (A-CDM) system, a European initiative designed to boost air traffic flow and operational efficiency of all airport operators by reducing delays and increasing the predictability of events.

In other sustainability efforts, the airport recently announced that 20% of its vehicles have now been upgraded to LEVs and a further 5% are hybrid vehicles. Some areas of operation require specialist four-wheel drives. To make sure the entire fleet can be converted to LEVs, the airport adopted a plugin hybrid replacement for four-wheel drives