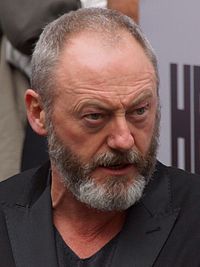 THE Dublin actor and Game Of Thrones star Liam Cunningham has rounded on TD Noel Grealish over his “disgusting comments” about migrants and called him a “typical ignorant” politician.

The Galway West Independent made controversial remarks about asylum seekers last week and hit out at “economic migrants” who “sponge” off the system.

Up to 2,000 people have signed a petition calling on Deputy Grealish to “clarify and apologise for racist comments” he made at the meeting.
Cunningham, from Dublin’s East Wall, tweeted:

“Disgusting comments. Deputy Noel Grealish is the typical ignorant a**hole politician we need to make sure never gets voted in again.”

Deputy Grealish, who can be heard addressing the 800-strong crowd, said: “Now I have worked with one or two Syrian families.

“These were genuine refugees who were persecuted in their homeland, because they were Christian, by ISIS.

“If you watch the news, and even our Taoiseach said two weeks ago he would take an extra 200 what-do-you-call migrants from Africa. These are economic migrants. These are people coming over here from Africa to sponge off the system here in Ireland.”

Taoiseach Leo Varadkar: “I haven’t heard the audio myself but if what’s said is true I think he needs to withdraw those remarks and certainly issue a statement to clarify what he said.”