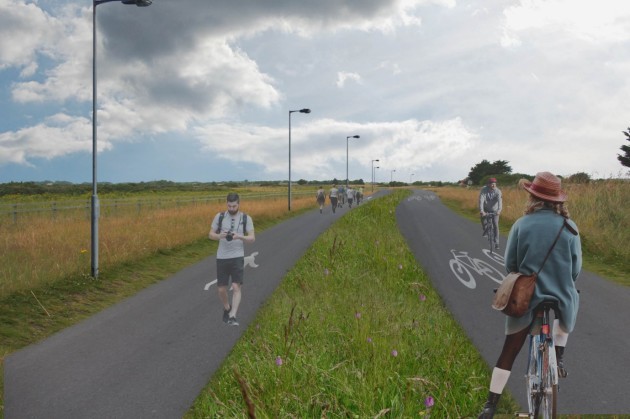 A NEW 1.8km walking and cycling greenway is being built in north Dublin which will link Baldoyle and Portmarnock.

The proposed greenway is in the Racecourse Park and will allow cyclists and pedestrians to travel through the park parallel to the Coast Road, linking Baldoyle with Portmarnock.

Murphy International was awarded the €2.5 million contract for the construction of the greenway earlier this month by Fingal County Council.

popular, safe and enjoyable resource for the local community

“I am delighted to see work commence on this pedestrian and cycling greenway in this spectacular coastal setting,” Mayor of Fingal Councillor Eoghan O’Brien said. “The outdoor active lifestyle is becoming increasingly popular and I can see this greenway becoming a very popular, safe and enjoyable resource for the local community as well as visitors and commuters.”

“The route has been designed taking account of the coastal setting so visitors and residents alike can enjoy Fingal’s incredible coastline.”

Cassie dreams of a baby with aid of sperm donor