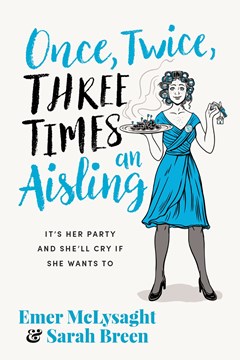 BORRIS author Sarah Breen from has been shortlisted for the An Post Irish Book Awards for her third novel Once, Twice, Three Times an Aisling, which she co-wrote with Newbridge native Emer McLysaght.

The pair have been shortlisted in two categories in the upcoming awards – in the popular fiction section and in the RTÉ Radio 1 Listeners’ Choice category.

Last year, they took the top prize for popular fiction in the same awards, while this time, broadcaster Miriam O’Callaghan is championing them in the RTÉ listeners’ choice section.

“We really need everyone to get out there and vote for us now. Up Carlow!”

“We’re absolutely thrilled to be nominated again in the An Post Irish Book Awards. We won popular fiction last year, but I think the competition is even tougher this year,” Sarah told The Nationalist.

“It’s an honour to have been chosen by Miriam O’Callaghan for the Radio One Listener’s Choice Award.

“We really need everyone to get out there and vote for us now. Up Carlow!”

This year’s contender Once, Twice, Three Times An Aisling is the third book in the Aisling series.

Sarah and Emer have been friends since their college years when they dreamt up the eponymous character of the novels. Aisling began life in a Facebook page.

He loves, he loves me not: we have highest divore...