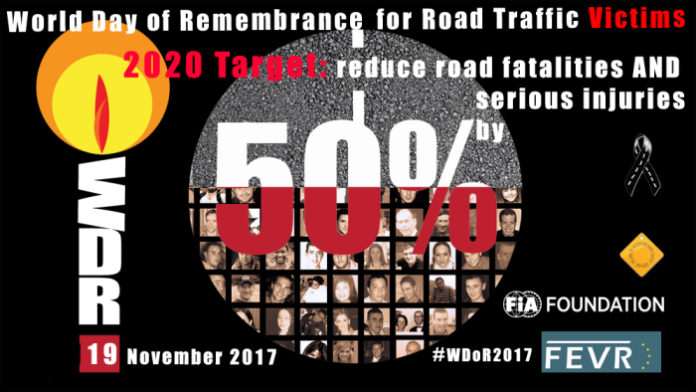 A TOTAL of 24,390 people have been killed on Irish roads since records began in 1959. That’s the equivalent of the town of Carlow.

According to the Road Safety Authority (RSA), more than 80,000 people have been seriously injured on Irish roads since the recording of serious injuries began in 1977.

To date in 2019 a total of 125 families, friends and communities have lost a loved one.
The figures came as World Day of Remembrance For Road Traffic Victims was marked at the weekend, on Sunday, November 17th. The global event takes place to remember those injured or killed in road traffic collisions.

Meanwhile, Gardaí are calling on drivers throughout Co Carlow to check their lights to avoid a possible minimum fine of €60. The force regularly sets up specific operations with mounted checkpoints checking lights on vehicles.

Motorists are usually given warnings and asked to fix lights or handed out on-the-spot fines for broken bulbs. Figures show that some 550,000 cars, or 20% of all cars on Irish roads, fail the NCT every year for defective lighting, according to the Road Safety Authority (RSA).

Vehicles with only one headlight or tail light are regularly seen on roads. If a light is defective, the driver’s range of vision is severely compromised and others may find it difficult to see you. A vehicle with one headlight could easily be mistaken for a motorcycle and an oncoming car may not allow the necessary space on a road for the vehicles to pass safely. It would also be difficult to see a pedestrian out walking because of lack of illumination.

Fog lights should also be used appropriately as they can dazzle and distract other drivers and easily cause a collision. Fog lights must only be used in fog, falling snow or during heavy rain. Some motorists incorrectly use them to compensate when a dipped headlight beam is broken.

Cllr says violence data is not up to date