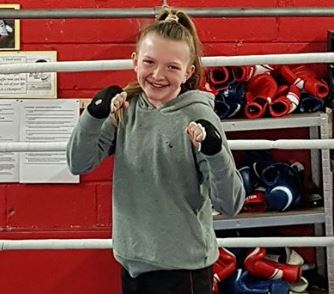 THE 12-year-old Carlow girl at the centre of a boxing debacle has said she was devastated not to be allowed fight for her second national title on Friday last week.

Chloe Black from Tullow Boxing Club had travelled to the National Stadium and had completed the weigh-in, only to be told just before the fight that she was disqualified because she also takes part in Muay Thai (Thai boxing).

The club said they were not informed of the rule that prohibits anyone who participates in another contact sport from competing in boxing. According to sources, a complaint was made on the Thursday by about Chloe Black’s involvement in Muay Thai.

The club took to Facebook on Friday night to vent their frustration, posting:

“Absolutely devastated (please share everyone) by what happened in the National Boxing Stadium tonight. A second potential national title was taken away from 12-year-old Chloe Black. There was a complaint made against Chloe because she partakes in another physical contact sport. There is a rule that was only brought to our attention today that no boxer is allowed compete in any other contact sport. We at Tullow Amateur Boxing Club knew nothing about this rule.”

Speaking to KCLR at the weekend, Chloe said it was heartbreaking: “I’m absolutely sickened. It’s ridiculous that the person who complained is taking it out on a 12-year-old.

“That’s like me saying, ‘You play basketball – you’re not allowed to play football if you’re playing basketball’. Just because you’re good at one sport doesn’t mean you’re going to be good at another.

I’m finished with boxing. I’ve lost so much respect for the sport

“I’m finished with boxing. I’ve lost so much respect for the sport, knowing that I trained so hard, I followed all the rules. The one rule I was not aware of, they wouldn’t let it pass.”

Chloe Black said she wanted to thank everyone who had supported her, but her dream of being the next Katie Taylor is now over.

Her coach in Tullow, Anthony Abbey said he was just as upset:
“We can’t get over it. I’m in two minds at the moment as to whether I want to stay in the boxing game at the moment. I don’t know.”