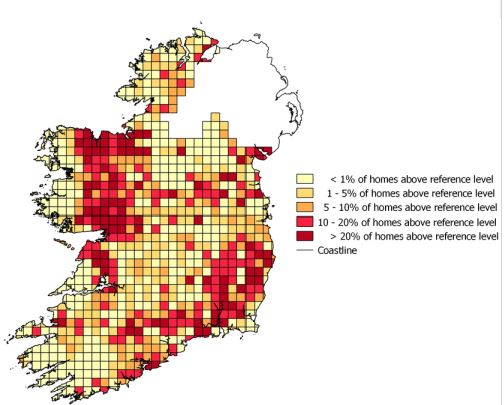 ONE in five homes tested in Carlow have been found to have radon levels above the acceptable level, according to the Environmental Protection Agency (EPA) which is calling on all householders in the county to take action to protect themselves and their families.

Radon is second only to smoking as the leading cause of lung cancer.   It is estimated that about 300 lung cancer cases each year in Ireland are linked to radon exposure.  Reducing high radon levels will, over time, save lives.

“Many parts of Carlow are deemed as high radon areas,” a spokesperson for the EPA said. Remedial action should be carried out as a matter of urgency to reduce exposure to radon.

up to 500,000 people are living in homes with radon levels above the acceptable level

Almost 1,400 homes in Carlow have been tested for radon and 260 of the homes tested were found to have radon levels above the acceptable level. Radon is easy to test for and easy to fix, so learning more about what it is, and how you can protect yourself is critical.

The World Health Organisation has categorised radon as a Group 1 carcinogen, in the same group as asbestos and tobacco smoke.

Scientist Alison Dowdall of the EPA said: “Radon is invisible, colourless and odourless.

“It is present in all Irish homes and it is estimated that up to 500,000 people are living in homes with radon levels above the acceptable level of 200 Bq/m3.

only a problem if it is ignored

“Radon is only a problem if it is ignored. If there is a high radon level in your home, it is exposing you and your family to an unnecessary radiation dose.

“Reducing radon levels is simple and inexpensive and will immediately reduce the risk of developing lung cancer. For moderate levels of radon, improving indoor ventilation may reduce the level by up to half, the cost of which is low,” she said.

Defib will help to local save lives